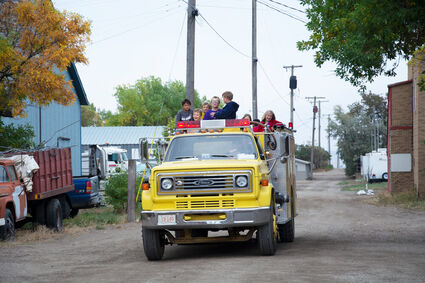 At FE Miley Elementary School, this year saw the return of a newer tradition: the building of class floats for the parade across town. This is the second year of float building, and it is quickly becoming a favorite amongst the students and staff. Heather Wolery, the principal at the elementary school explained: "I like the floats. The kids get to use their own imagination and build their own creation and then they get to parade it. They're really excited..." The wagon-sized floats are themed to fit the week's festivities including: covered wagons, purple and gold tractors, various scenes involving the Box Elder Bears (the Pioneers' opponents in the homecoming game), and fire prevention scenes (in honor of the Fire Department's chili feed fundraiser).

This year's Chili Feed/Homecoming was also an opportunity for the return of an old favorite tradition, which has been on hiatus for the last two years due to the Covid precautions: the buddies. Katie Hanson, who teaches 1st Grade, explained the Buddy tradition: "The big thing is the joining of both schools together. The older kids come over ,and they're an example for the younger kids. It's a way to bring them together because we don't do a ton of stuff where both schools are interacting." Each elementary school student is joined with an older kid, who is their buddy for the day. The pair spend the day together and walk in the parade to the High School for the pep rally and Pass, Punt, Kick. Heather remarked on the return of the tradition: "I don't think we've done this for two years. It's so good to be back together and having kids be here. I think it's better for the big kids than it is for the elementary kids, because it reminds them that somebody looks up to you and it makes them feel good."

I pulled Eva Wagoner from an intense jump rope session with her buddy and a group of other students to ask about buddy day: "It's weird, because we haven't done it in a long time and I'm actually a senior, so I'm the oldest. It is so much fun, because you're gonna do stuff that they don't do now." She was particularly surprised to learn that jump rope had fallen from popularity. "They don't even know how to jump rope. We were pros at jump rope." Eva and her friends realized it was their duty to reintroduce the time honored activity to the younger kids. The jump rope lesson extended through recess and hopefully sparked a return to the old favorite in years to come. Another senior I spoke with, Angie Sant, described her experience with buddy day: "It's really cool because they're just excited to be around you... it's just exciting to see all the little kids because they seem so much littler now than when I was in elementary school. I thought I was big, but they're all tiny."

As the students began assembling in front of the elementary school for the parade through town to the High School, I had a chance to speak with several of the High School kids in the hallways. Over and over, I heard remarks about how strange it was to see the school as a larger student. The most common comments related to the strangeness of how small everything is now, when it all seemed so large a few years ago.

As the students began their march through town, I spoke with Cinda Pearson, who echoed the sentiment I encountered time and again with the elementary school teachers on seeing students "that've moved on to the high school. Definitely when I look at them, I have great memories with them all. It's fun to see." Teachers also remarked on the nostalgia and pride they feel seeing their students all grown up and returning to play buddy to the kids at FE Miley.

As the students, buddies, and floats marched to the high school football field, locals gathered on their doorsteps and the sidewalks outside of their businesses to watch the procession. I spoke with several spectators, who talked about the delight they experienced seeing excited children marching through town and the energy that pervaded the entire scene. It struck me that even though the Chili Feed/Homecoming celebration is heavily focused on whipping up the spirits and community pride of our students, the overflow of their joy blesses those around them. At the football field, the students danced, sang, and cheered at a pep rally in advance of the homecoming game that evening. A crowd of parents and locals had gathered to enjoy the show.

Rich Roth kicked off the Punt, Pass, Kick competition. "It was originally started with the NFL. They put it together as a way to get kids involved in being active." Eventually, the program that started the competition came to an end. At that time "Rotary just kind of took it over from there and we're on our 20th year this year of Rotary doing doing it. Rotary did it all long because they needed sponsors to do it. Every year, we get about 80 to 100 kids that come and participate. What Rotary did with it was take over the prizes, making kids aware of it, giving the prizes and getting people's names in the paper. So it's really been a fun thing and the parents really like it and get involved. The kids love it. And then it's really nice to see the community involvement with the football players." Through Rotary, Rich has been involved in the event, eventually taking on running it. "It's been a fun thing to put on and I've tried to keep it organized for the whole time. It's like herding cats, but it's been good for sure." 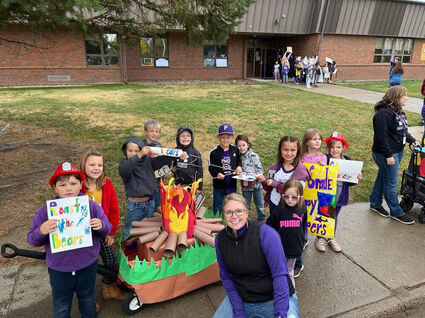 The Chili Feed closed out the major community events before the varsity game. The feed itself started in 1955 and has been held as a fundraiser for the local fire department. I spoke with Larry Ophus about the history of the feed. "The first one in 1955 that brought in $350." He explained that the Feed now brings in around $20,000. Typically, the Feed attracts around 500 attendees. This year saw the return of the ambulance and fire engine rides around town for kids, young and old alike. The rides have been a tradition in our community since the very beginning of the Feed, apart from one year early on when questions of liability prompted skipping the activity. It quickly returned and has been a staple of the feed ever since. The Feed is the only fundraiser done by the fire department, which does not receive financial support from the community.

The evening concluded with Big Sandy winning its homecoming game against Box Elder.