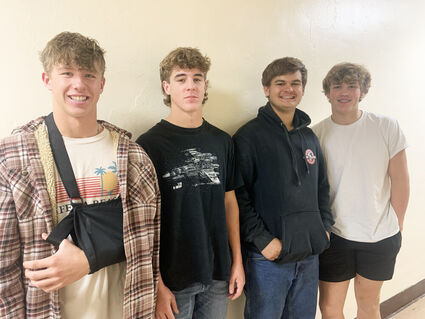 It is important to realize just how good our Pioneer Football team is. We need to celebrate the accomplishments and dedication it has taken to get where they are! But let's be honest, the others have been easy up to last week's game; they hadn't had any real competition. I wanted to know how they stayed hungry. What kept them giving their best week after week? So I invited the four senior captains, Lance Rutledge, Rusty Gasvoda, Braydon Cline, and Kody Strutz, to the Big Sandy teacher's lounge and visited with them.

Rusty gave him a fist pump and said to Lance. "I totally agree with you. I was gonna mention that, too, because look at them when they go in. They play really well!

They talked numerous times about how good the whole team was, not just the starters, and how anybody could step up and play. I tried to get the numbers of how much we dominated the other teams in both offensive and defense. For example, the starting defense has not yet been scored on. They'd love it if they could continue shutting people down, but they also know that in competing at the top of the playoffs, the defense will need to be at its best.

Kody, shaking his head, Yes! "Yeah, and a lot of us put a lot of work in over the summer. We don't want that to go to waste."

Braydon said what keeps him motivated "is hearing all the people in our community talk about how cool it would be if we won the state championship."

Kody followed up, "What keeps me the most motivated is seeing people cry--last year. Two years ago, I had to watch my brother cry after a football game, and that was hard for me because he really wanted to state championship. I feel like it's only fair to those guys that set us up for success that we come out and get it. I kind of want to do it for them in the past and do it for us now because we've all worked really hard for it, and like Brayden said, I don't want to lose in the semifinals again for the third year in a row and watch that team go on to win the state championship."

We talked about Custer. "Their whole offense, their whole defense, is built around this one player that's committed to the cats," Rusty said. He said, "that's our goal. I mean, I'd like for us to go through the whole season and have our starting defense not allow a single touchdown. We played Broadview a couple of weeks ago, and I feel like if we held them scoreless and sent a message to them that we're the real deal. They're not the one number one team in the state like they think."

I asked them what they had learned. Rusty said, "the rewards from just like putting your head down, working like during the offseason. Everything shows on the field, and I think that applies to a lot of things in life. "

Lance said, "None of us could do this by ourselves but having the team around us that we rely on and others having them rely on you."

Kody commented, "I feel like adversity is something that you have to experience to figure out how to deal with it. You experience a lot of adversity in football and all sports. I think dealing with adversity is helpful because when you get out into the world, you will deal with a lot of that adversity."

Braydon said smiling, "so you guys know they nailed it, so I don't need to say anything more."

Standing along the football field, I overheard an older gentleman say, "There is something special about this team."

It's going to get more challenging, but the Big Sandy Pioneer football team can be State Champions!