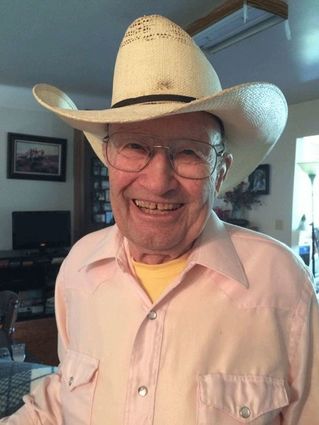 Robert H. Jordan was born October 7, 1926, and passed away on September 10, 2017. Born at home in Deer Park, Montana, six miles west of Maudlow, Bob was the third child of Charles Elmer and Maggie Etta Arnold Jordan. His mother passed away when he was four years old leaving his father to raise all four children alone. Bob's early childhood was spent in the Deer Park area. He attended the Crane School in lower Sixteen Mile, the Morgan School in the middle fork of Sixteen and the Josephine School in in the north fork of Sixteen through the sixth grade. He attended school in Belgrade, graduating from high school in 1944. After graduating, he went into the Navy at the age of 17. He served on the aircraft carrier, the "U.S.S. Siboney" in the South Pacific during World War II and was honorably discharged in 1946.

Bob went to work for rancher, Harry Brainard, near Manhattan after his discharge and remained there until the fall of 1951. In the spring of 1951 he married Mardella Reichelt at St. Paul's Methodist Church in Helena, Montana. Fall of 1952 found them in Butte, Montana, where they were both employed at Hansen Packing, Bob as a cattle buyer. Springtime found them back in the Gallatin Valley with Bob working for Vance Bright doing farm work. That fall he went to work for Mt. Hagen Ranches at Galen, Montana-returning to the Gallatin Valley in the spring of 1953; this time to stay. He worked for Ed Poore south of Bozeman and bought his own ranch in the mouth of Hyalite Canyon a few years later. Bob ranched summers and logged during the winters until the fall of 1962 when he became a Gallatin County Bridge Department employee, in addition to ranching, until he retired in 1990. He was the Bridge Superintendent his last ten years there.

Bob was involved with 4-H for 30 years, serving as a leader for the Fowler, Beef and Swine 4-H Club and on the Gallatin County Horse Committee. He and other Committee members were in charge of the horse show at the 4-H Summer Fair. Many hours were spent checking out horse projects and helping members with their projects. He was active in the 4-H County Council, serving as Vice-President and President. Bob was active in the Montana Winter Fair for over fifty years, first with the 4-H livestock shows and later as the superintendent of the Horse Division. He served on the Montana Winter Fair Board as a director for seven years and was inducted into the Montana Winter Fair Hall of Fame in 2000. A year later he was awarded the Friend to Agriculture award for Gallatin County. He served as trustee on the Anderson School Board, the "little red school house" for 15 years and as President of the Middle Creek Water Users Association. He was a member of the Bozeman United Methodist Church.

Bob enjoyed square dancing with the DoCiDo Square Dance club for ten years and began bowling with the New Holland team after retirement. Hunting was always one of his greatest pleasures; packing horses and riding into hunting camp with friends was a yearly event. He was a hunter's guide for the 320 Ranch in the 1950's. He loved riding and raising good horses and exploring new country. He was always interested in community and neighbors. After retiring from the county and later selling his cows, it meant a lot to him to be able to help neighbors with their livestock and field work.

Family was important to Bob. Whether he was helping his daughters with their 4-H animals or pulling them out of the ditch, he was always there when they needed him. His grandchildren were a source of joy to him. He and Mardella traveled many miles to soccer, basketball, football and volleyball games, as well as providing horses and attending horse shows and rodeos. When Mardella's multiple sclerosis worsened, he was a kind and loving caretaker for many years until her death in 2011.

The family would like to express their thanks to the kind and loving caregivers with Bozeman AdvoCare, supportive neighbors, Bozeman Hospice, Central Montana Hospice and especially his granddaughter, Kinze.

A celebration of life will take place Monday, September 18th at 10:30 am at the Bozeman United Methodist Church, 121 South Willson Avenue, Bozeman, Montana. Interment at the Sunset Hills cemetery will follow.

Arrangements are in the care of Dokken-Nelson Funeral Service. http://www.dokkennelson.com