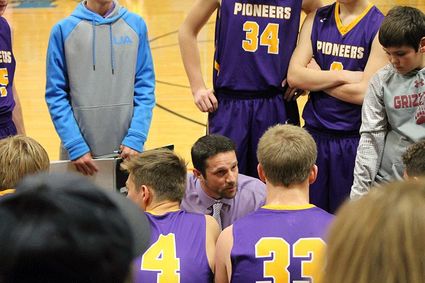 Thomas Dilworth is high on Big Sandy Boys Basketball. He is excited for the community to watch the boys play and improve. He promises if you come to the Big Sandy High School gym you'll be impressed with the intensity in which the boys are playing the game. They play an up-tempo game making it fun to watch. You will get your money's worth when you come watch Big Sandy Basketball.

Printed on the backs of the boys' basketball shirts is WYW. The team's motto for this year. It means What's Your Why. "The kids need to discover why they play basketball. What is it they want out of this? They should discover their emotion and the passion on why they play the game so when things get tough they have something to draw on." The overriding mission the boys expressed this year was to bring hope and pride to the team and to the community. As a team, they want to bring back a winning tradition back to Big Sandy. "We're a young team, a really, really, young team, one junior and the rest are freshman and sophomores. They are hardworking kids, they want to be here, they want to be successful, they're willing to put in the work. It's going to be a rough start, we'll struggle in the beginning of the season. The kids need to figure out what role they'll be playing. It's going to be a tough transition, because some of those roles has had to change. But I think as they start to see themselves as a team that is coming together and becoming successful it's going to be fun to watch. We are concentrating on fundamentals, but they are learning quick."

His main philosophy as a coach is to coach character first. "I tell the kids repeatedly, if not every day, it's not about basketball it's about life. If basketball can teach you values, like integrity, accountability, and hard work not just on a basketball court, but in life, you'll be successful. If you can learn to overcome failure and learn how to work as a team. For me as a coach it isn't about the win/lose record necessarily but when they get out of school what have they learned from basketball. That's what I'm about and the kids know that. We teach discipline, if their late for practice they lose playing time. They know they have to earn their playing time, it's not just granted to them. Sometimes it is the hardest working kids that will get the playing time. Sometimes I see people in the stands, and parents question why someone is not playing, but I have an open-door practice and if they want to come in and watch and they still don't understand why a kid isn't getting more minutes, then they haven't seen the effort they make in practice. The kids are buying into it. They are starting to learn integrity. And they know they have to put in more effort."