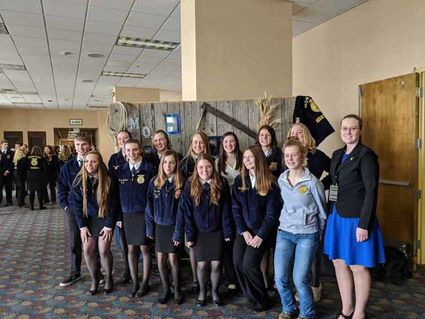 I started by talking to Faith Gasvoda who is part of the team that is judging in Livestock (cow, pigs, goat, sheep) at the state FFA Convention, she hoped she knew enough. They've been practicing hard. The FFA members who went to the state Convention were gone for four days and three nights. FFA has to raise their own funds and this convention will cost around $3,000. They'll need to raise further funds for future activities, as this will drain their banking account. That is why they have sponsored the Donkey Basketball game Tuesday, April 24th at 7:00 p.m. There are three teams made up of students and teachers all who will be competing against themselves. Even if you don't want to laugh all night, a donation to the cause would be greatly appreciated.

Amy Gasvoda competed in Junior Creed. Amy had to place in the top two at the district to go to the state convention. According to Brianna Bernhardt, Agricultural Educational Teacher at Big Sandy High School and FFA Advisor, it is rare for a Jr. High student to go to a state Convention. She had to memorize the five paragraph creed and presented it verbally in a convincing manner. Also showing in the Agriscience Fair was Jessica Roth and Tyler Schwarzbach with the science projects they have already won numerous awards for.

Andrea Rutledge was voted in as Montana State FFA 2018-2019 2nd Vice-President. She has also earned her FFA State Degree which requires 300 hours of work, earned and properly invested $2,000, give a speech and demonstrated proper parliamentary procedure. "It's very difficult to get." Brianna Bernhardt told me. Andrea also completed in the Extemporaneous Speaking because she was also in the top two at districts. She won

the Montana Land Reliance Scholarship worth $500 and because she is now a state officer she also receives a scholarship to MSU for $3,000. Andrea will be attending the National FFA convention and hopes to bring with her others from Big Sandy.

Brianna Bernhardt, Agricultural Educational Teacher at Big Sandy High School and FFA Advisor, believes the kids have worked very hard this year. They held a celebration with dinner, activities, and awards last week with their annual FFA banquet. Brianna Bernhardt quotes Thomas Jefferson on all her emails, "Agriculture is our wisest pursuit because it will, in the end, contribute most to real wealth, good morals, and happiness." That is worth taking a few hours to acknowledge. Andrea Rutledge also believes agriculture is important. She thinks FFA is an incredible organization that "supports agriculture while creating future leaders, making life-long friends, and educates the population about agriculture." She is planning on making a career in agriculture.