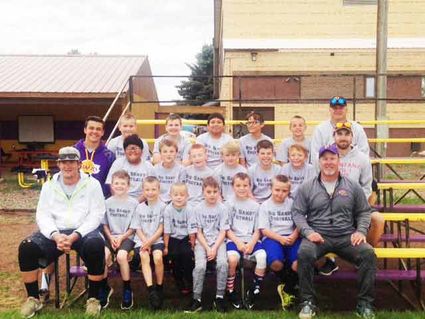 There was running, kicking, and passing and catching the football. Eighteen grade school kids meet every morning between 9-12 o'clock dreaming of becoming the next Pioneer football player. "It was fun. I'll do it again next year." It was just concentrating on the basic of playing football and encouraging them with a lot of high fives and words of encouragement. Helping with the little kid's camp was Kurt Stutz and a number of varsity players.

Chuck Terry head Pioneer Football coach held two football camps this summer. A total of 40 kids participated. One camp was designed for grade school kids. The other which was run from 1-5 everyday was for Jr High and Senior High boys who wanted to play football at Big Sandy this coming fall.

For coach, safety is the most important thing. "But I want these kids to have a good experience. I want them to be excited about being a Pioneer. Proud of wearing the purple and gold."

Coach Terry says, "I like it here. I fell in love with the kids and the attitude of the kids, and the town. I want to see pride in the kids. We have a good bunch of kids here." Chuck Terry had different opportunities but after helping a little last year just wanted to come back and work with all of the kids here. He'll have five other coaches helping him this fall.

During the afternoon camp Coach Terry said, "We are doing a lot of installs into a new system. Everything is new. New plays. New programs." Coach Terry believes in hard discipline and structure. "I told them at this point no one owns a position. No one has a place. I'm watching and will determine who gets what later." With this coach, they'll have to earn their position after hard work and determination. "The kids came to work. They want to be successful. They have a lot of energy."

Coach Terry is living at John Brown's house with his two sons. His wife and daughter who is a senior at Havre High School and wants to graduate at Havre with her friends will stay in Havre this year. He has a lot of excitement. He wants the town to be excited too. 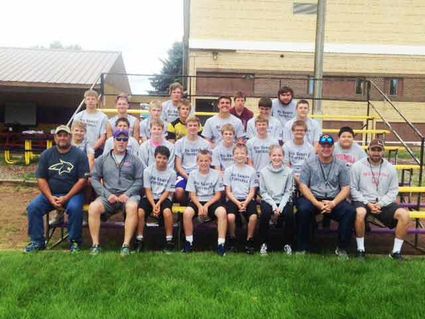 As I was walking out of the new coach's office after talking to Chuck Terry I ran into brothers Parker and Brock Proulx. They both understand that this coach believes in strict discipline.

Brock said, "I want to play football because it will help me elsewhere. But also, these kids are my friends. They are a lot of fun to be around. I like coach Terry's philosophy and we have the ability to be success and I want to be a part of that."

Parker says, "I play because I love it. It's my favorite thing. I play for my dad who passed away when I was nine. I want to be as good as he was. Yesterday after he (Coach Terry) found out I broke my thumb, he said 'I'm going to sign you up for the powder puff'."

Obviously, the excitement will continue to build until the football is kicked off during the first game of the season.