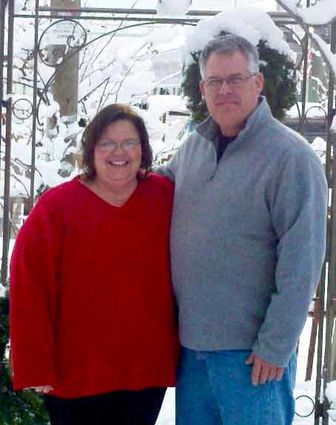 Kelly Haaland was born in Havre, but grew up on a farm 6 miles north of in Inverness. He went to school in Inverness from kindergarten till his sophomore year. Then he switched schools and went to Rudyard his junior and senior years. After graduation, he went to Northern for two years and graduated in Diesel technology. After graduation, he returned to the farm to work with his father.

Kelly's wife Jody (Wilson) grew up in Big Sandy. She is the granddaughter of Lou and Doris Lawrence, former owners of the Mountaineer, and Jeanne (Lawerence) Nydegger and Tiny Wilson. She worked in the electronics building at Northern and often was the tool girl in the lab where he met her. They were married in the Christ Lutheran Church here in Big Sandy in 1983.

After the army, Kelly decided to go back to school. At Western Montana College, he received his teaching degree in Industrial Technology, or shop, with a minor in Library. His first teaching job was in Winnett Montana where he stayed for two years before "defecting", moving, to Minnesota. "We wanted to try something different." He taught school for five years in Minnesota. He decided to get his Administrative Degree in 2000 in Britton, South Dakota which was only one hour away from Minnesota. "Believe it or not there was a community north of Inverness where they had erected a Minnesota Hall."

2001 they moved to North Dakota where he become a principle for two years. His mother's health started to fail so he moved back home. After a short time, away from administration, Larry moved to Busby Montana, which is a Northern Cheyenne Tribal School. "Where I learned a lot. I made a bunch of great friends." He was there for almost 10-years; besides the normal activity of an administrator he became the activity director, transportation director and school bus driver.

After that Kelly became the Superintendent of Millstone's schools for nine years, before moving to Big Sandy to take over the Superintendent's position here. "We are both happy to be here. Both Jody and I are glad to be back in Big Sandy. This is a good move for both of us. You can see forever and that is what I missed." He wants open relationships with the community, teachers, staff, parents, and students. Larry is looking forward to building a home here.

Jody is a crafter and she loves quilting. Larry likes to work, hunt, fish, and ride farm equipment given the chance. He grew up on a 5020 John Deere tractor.

It's time to open our arms and welcome a new community member. He'll be a major part of our children's lives.