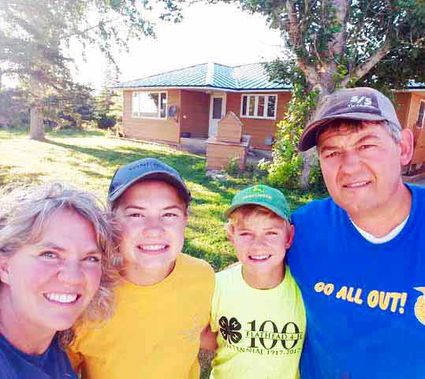 I met him in the high school shop as he was trying to clean and reorganize it. I noticed he was wearing a CHS hat and thought immediately this guy will fit in. It's exciting to welcome new people to the town of Big Sandy, especially when they are excited to be here. Layne told me, "We've already met quite a few people. It's awesome. It's wonderful. It feels right. I think this will be a good move for our family."

He was born and raised on a grain and potato farm in South Eastern Idaho. "My great grandfather homesteaded the farm, my grandfather farmed, and my father farmed, but unfortunately when I was a kid, about junior high age, my father sold that farm. I grew up milking cows at my grandfathers all through four years of high school". He grew up in a farming community, moving pipe for irrigation, with lots of physical labor. His high school would take two weeks off for potato harvest in October. Agriculture was a big part of his life. "As a kid, everybody who was anybody was a farmer. Those were the people I looked up too, those where my neighbors. It was difficult for me when dad had to sell the farm."

His first teaching job was in Colorado for six years. He had a summer contract as well, going around visiting with kids, helping them get ready for the fair. The first couple of years he had to teach school in the summer because they had summer school there.

Layne taught in Dillon, Montana for 10 years before he stepped out of teaching and became a certified crop consultant. He had some clients North of Havre, which introduced him to this part of the state. A teaching job opened up in Kalispell and he decided to get back into teaching and took that job. He taught in Kalispell for four years.

He moved here because he looks forward to teaching smaller numbers of students at a time and also being able to teach all the kids for four years was appealing to him. In Kalispell, it felt like an assembly line and he could only teach each grade for one year.

"I absolutely wanted to get back to a small town. This has been a strong program for years and strongly supported". He loves working in the shop, and believes it's a skill for life class. He'll be teaching car maintenance, carpentry/ building construction, welding, agronomy, natural resource management, ag business, animal science, and mechanical trades.

He is a great supporter of the 4-H program, but also believes in a strong FFA program and has been involved in that for years.

His wife, Wendy, works at the school. His son Cooper is in the 7th grader and loves sports. Erin, his daughter, is a junior and plays the violin and loves music. Welcome to Big Sandy!