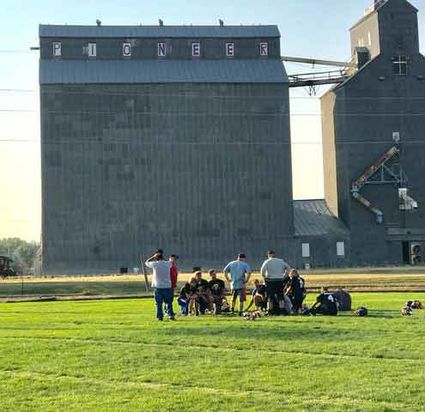 The Big Sandy Pioneers have been having two a day practice for a week as they prepare for the up coming season. The Pioneers will open the season this Friday at 7:00 p.m. on the road against the Sunburst Refiners.

Believe it or not it is the beginning of another Big Sandy Pioneer Football season. As I drove up to the football field for the first practice of the season, which started at 6:00 in the morning, I couldn't help but be excited. There were five coaches on the field and 13 football players. The players were running and there was spirited music blasting away to encourage a certain pace. The field was in great shape, incredible green under a grain elevator with PIONEER placed in its windows. At the end of practice, and although I was a distance away from the team and couldn't hear every word the coaches were telling the boys, I did hear the word "proud" mentioned a number of times, by every single coach.

Head Coach Chuck Terry has four other coaches helping him out this year; Curt Stutz, Larry Jappe, Larry Bitz and Tristan Cummings. Cummings is from Belt and a current student at Northern. The emphasis will be on character building, structure, and discipline. Coach Terry expects each player to step up and be a leader, showing the community that there is a reason we can be proud of these boys.

The Pioneer football team approaches this year with a few new additions. They received new football uniforms this year, as it was their turn in the rotation. Also, football helmets are required by state law to be inspected every year, if the date on the helmet is nine years old or if the helmet has a crack or has any other concern it needs to be replaced, therefore this year we also got a few new helmets. The locker room has been repaired and repainted and an office for the football coach made from an old storage closet.

Also new this year is a complete new program. Coach Terry wanted the team to learn all new plays, as his approach will be to mix up the plays during the game. He said the players already know the plays and now they just need to learn to implement them.

I was impressed with the senior's leaders of this team, Schwartzbach and Sipler, who clearly know they have the responsibility to lead by example to the entire team, including the members that don't get as much playing time. "They are part of the team. Everyone is important!" Schwartzbach said he was "impressed. From his freshman year to this year is so different because everyone is working harder and has a better attitude this year." Sipler said that what he wants "is at the end of the year that we worked our hardest and everyone is glad they were a part of the team." He knows they will improve with each game. Both young men had a great attitude and were so easy to talk to.