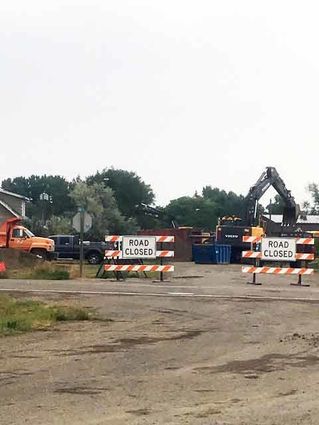 Pictured above is the ongoing work of the water project taking place in Big Sandy.

Following the pledge and minutes Leslie Gregory, Manager of the City Pool, reported the pool heater had quit and needs to be replaced. Tim Labuda reported what was exactly wrong and gave some ideas on how to replace the heater. Further research will be done and the council gave initial agreement to purchasing a new heater and fixing it this fall so it can open next summer on time. Leslie asked if the pool could have longer hours next summer. It was also approved. And even though the water is cold it will be still be used by the school for PE for three weeks.

The new water project has begun and they already have 300 feet completed. They ran into some minor issues and had to move a fire hydrant. Paul Tuss from Bear Paw Development was present at the meeting to start the first financial draw down for payment of the project.

Rotary ask the city to participate in and approve a project that would build a side walk from the high school to the grade school. They had attended a conference and learned there were a variety of grants that Big Sandy could get to help build safe walking sidewalks for the town which would help children get to school safely. Paul Tuss mentioned that it could be something that Bear Paw Development could help write. Mayor Schwarzbach asked if KLJ would write up a proposal for the cost of measuring the roads with placement of a sidewalk for Big Sandy. Ted Pursley will be the council member to work with the committee on this project.

Resolution 2019-02: Amendment to the Animal Ordinance was discussed. The wording needed to be change which allowed the ordinance to be consistent. There was no major change just more correct wording.

Resolution 2019-03 which is the intent to raise water rates. The council has one more working meeting which will take place this month. After they have made an initial finding about how much to raise the water rate letters will be sent to every household and they have to have at least two public meetings to discuss the new rate before implementing it.

Resolution 2019-01 which continued the relationship with Bear Paw Development of Havre and it was approved.