First Day of School for a new class of Kindergartener's 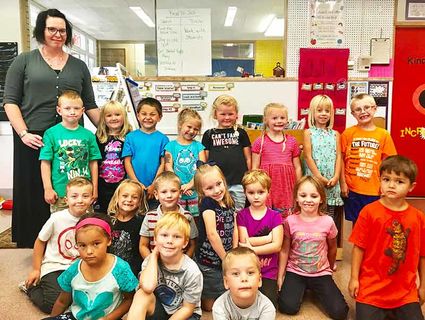 Mrs. Samantha Weaver has taught Kindergarten before and although 19 students seems like a lot of kids in one room for anyone else, but she's got it under control. "It's a little much for the four days, but after that it works great." I couldn't help but wonder what the kids thought of school, and what did they want to learn at school so I just had to go and ask them. I wondered if they would talk to me at all, but Mrs. Weaver said, "Oh, they are a talkative bunch. You won't have any trouble at all." And sure enough, I didn't have any trouble except I didn't know their names and couldn't call on them one at a time. I thought those who said why they came to school, "so I can play on the playground", were probably the most honest. Or those that said they wanted to "play with toys." One actually said, "I don't know". There was the typical answer like "I want to learn my numbers," and "I want to learn my letters". "I want to learn to read," but then one boy said immediately, "My mom wants me to learn to read."

There were a couple of shy little girls who said they wanted to go to the playground so they "could see their sister." One little boy answered my question but was speaking so quietly I couldn't hear him and one little girl said, "He's shy. He wants me to talk for him."

I asked them if I could take a picture, which was a job for Mrs. Weaver as she maneuvered them all into position. I marveled as she gave them instructions. "I want you to stand here. I want you to sit on your knees. I want you to sit on your pockets, and just like that they were all in place. Even the one boy who didn't want to participate in answering my question, and went to lay down, decided he did want to be in the picture. I asked if I could take one good picture and then I would take a picture of them with silly faces. They liked that, but then they all wanted to see the pictures. Mrs. Weaver told them they would see the picture in the paper, and just like that they went to their chairs.

For the first day of school it was fun to get to know our new students. It will be fun to watch them grow up.