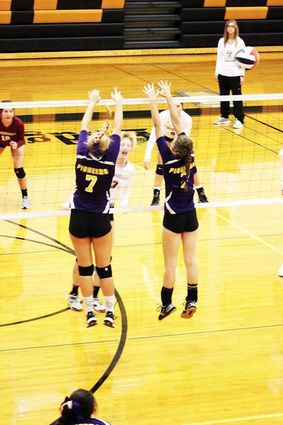 Senior Jaylyn Cline and junior Stacey Allderdice come together to form a block against Cascade on Friday.

The Big Sandy Pioneer Volleyball team had a busy week on the court with a match against the Chinook Sugarbeeters on Thursday and then two days of tournament play at the Cascade Badger Invitational.

The Sugarbeeters came out on top 3-0 in the District 6C-East opener for both teams.