Paul Tuss, Democrat, Senate District 14 sits down with The Mountaineer 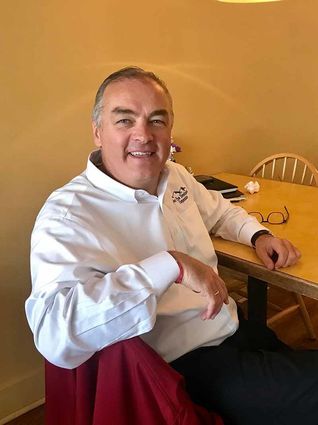 Paul Tuss met me at the Bear Paw Deli on his way to Fort Benton. He grabs a cup of coffee and a scone. He's tired, but feels encouraged and empowered, not by his efforts, but by the people in this district.

He tells me he has knocked on 6,700 doors. "People are genuinely nice! Regardless of their political persuasion. The number one over-arching issue that comes up again and again. Regardless of any specific issues related to taxation, education, or health care is the end of the partisan bickering.

People are really tired of the Democrats and Republicans shouting at each other trying to get credit for the good stuff. Trying to have the bad stuff associated with the other party. They are just genuinely tired of that."

He mentions that people believe the level of political dysfunction that is happening in Washington DC has seeped down to the state level. "I think there is some truth to that. Far too often in Helena our Legislatures are more interested in scoring political points then they are in solving problems."

I mentioned that Russ Temple told me that Paul had called him before he decided to run. "Russ and I are friends. We aren't just friends we're genuine friends. He has been my friend for 18 years.

I think this is a race, I really do, a race where two friends, who perhaps have different opinions about how we get from point A to point B, but at the end of the day if I am unsuccessful at this effort I wish him well and I will do everything I can to support him.

I think Russ feels exactly the same way. Wouldn't it be nice if every campaign in the state of Montana where like this one? Both of our campaigns are focused on what we want to do in Helena verses tearing down the other guy and what they won't do.

People want their elected officials to solve problems, and if that means reaching across the aisle, and most of the time it does, that's what we should be doing.

The other side has good ideas, and if they are good ideas, we shouldn't worry about who gets credit for them. Let's do what we can do to put an end to the bitter partisan that is crippling the nation."

One of the issues Northern Montanans have talked to him about is how to fund Public Schools. "If we lose our school we lose our community."

Paul understands that local schools need to be made a priority. He has been on the Board of Regency since 2011. Concerning higher education in Montana he noted that when he was a student 70% of his education was paid for by the state of Montana. It made it affordable.

His mom and dad couldn't pay for his education. When he took his daughter to Missoula, just this year, the state now pays 38% so the majority of tuition costs fall on the student. "Here is a staggering fact, there is more college student loan debt in this country then there is credit card debt."

In Montana 80 % of students who get an education in the Montana University systems stay in the state of Montana. "The quality of life we have is phenomenal. We are the number one state in the nation for entrepreneurship because people want to live here!"

"I've been building infrastructure for almost 20 years. You can't begin a conversation about building our economy without first having a conversation about the quality of our infrastructure. Because I guarantee you if you don't have good roads, good bridges, good highways, good water and sewer systems, good airports, no one is going to build a business there or bring a business here. It just isn't going to happen. So, infrastructure is really a foundation building block to economic growth. This is one area which the partisanship raises it head. These are not partisanship issues. I have worked across the aisle for two decades. I will defiantly use that ability to reach across this legislature."

Paul's wife Pam was in public office serving on the Havre City Council for 9 years. Paul and his wife often talked about how he could serve the public as well. He has two children, a son who lives in Havre, and his daughter is a freshman in Missoula. Paul's home went from four people in his household to just him. Pam Tuss lived victoriously even though was diagnosed with ALS. She passed away and he needed an opportunity to fill the void when the opportunity came up to run for office and he loves it. "Truth is the energy that I get from this campaign comes for the people I talk with." His mother had a saying, "You have two ears and one mouth. You should be using them in that proportion. I don't know everything and I don't have all the answers, so I need to hear from smart people."

'It's an honor to be even considered for this position. It's an honor to be on the ballet, when I talk about serving in the Montana Legislature I think of all of the needs we have in Northern Montana. It would be a real honor to take all those conversations, concern, dreams, hopes, and issues expressed to me and get down to work. People are only anti-government when government doesn't work. That's my opinion. We really need government to function properly. We need a strong private sector and we need a strong public sector. The way we get government to work the best is to work together"