Veteran's Day at the Schools 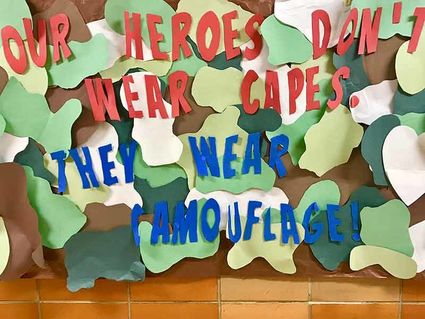 Mrs. Amanda Robertson, Big Sandy Music teacher, asked every student to wear red, white, and blue to their Veteran's day concert. The patriotic theme was everywhere. But no one took it to the extreme like Labuda, who painted her face blue, wore a red shirt and white pants.

Every age group participated in the Veterans Day Program held at the High School on November 12th. The High School 7-12 grade choir sang the Star-Spangled Banner and the 6th grade class lead the audience with the Pledge of Allegiance. The Choir sang We, the People. Superintendent Kelly Haaland was the guest speaker as he is a Veteran himself.

"We're here today to honor our service members and to remember their sacrifices they have made and the courage it takes to defend honor, duty, and country. Thinking of the heroes who join us in this group today and those who are here only in spirit, a person can't help but feel awed by the enormity of what we encountered. We stand in the midst of patriots and the family and friends of those who have nobly served."

He asked the veterans in the group to stand. "The service members we honor today came from all walks of life, but they shared several fundamental qualities. They possessed courage, pride, determination, selflessness, dedication to duty and integrity-all the qualities needed to serve a cause large than one's self. Many of them didn't ask to leave their homes to fight on distant battlefields.

Many didn't even volunteer. They didn't go to war because they loved fighting. They were called to be a part of something bigger than themselves. They were ordinary people who responded in extraordinary ways in extreme times. They rose to the nation's call because they wanted to protect a nation which has given us so much. Your presence here today and that of the people gathering all across America is a tribute to those lost troops and to their families. It is a way to say we remember. From the soldiers who shivered and starved through the winter at Valley Forge to the doughboys crouched in the muddy trenches of France to the platoon who patrolled the hazy jungles of Vietnam and the young man or woman patrolling the mountains of Afghanistan, we remember and honor them all."

"On Veterans Day we honor all,

Who answered to a service call.

Fought for freedom, brave and bold.

Some have lived, while others died,

And all of them deserve our pride.

We're proud of all the soldiers who,

They fought for us and all our rights

They fought through many days and nights

And though we many not know each name,

We thank All veterans just the same."

The high school band played an Armed Forces Medley to end the program asking every Vet to stand during the official song of their branch in the arm forces. It was a moving tribute.