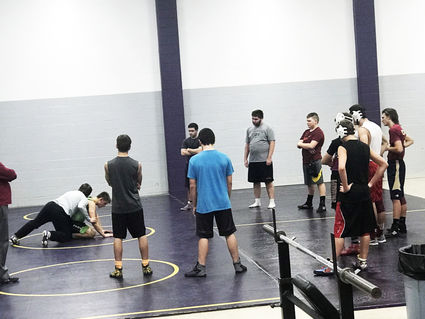 This year's Head Wrestling Coach is Tucker Taylor the new history teacher in Big Sandy. He was selected as Teacher of the Month in September so he is well liked by the students. The feeling is mutual, he likes teaching here. "I like it, I've always wanted to teach in a small town. I like Big Sandy. I really like the kids." As a teacher, he believes Big Sandy does a good job of balancing sports and academics. "At the Booster Club Winter kick off I noticed that many of our Science Olympia scientists were athletes as well."

We have four students Sophomore Bayley Generux at 126 pounds, Senior Jordan Schwarzbach is, Juniors Kaden Tielking and Dillin Geyer going out for wrestling this year, however they we'll be co-oping with Fort Benton. This way they will have a complete wrestling team. Eight wrestlers from Fort Benton will be traveling to Big Sandy that night and Big Sandy will travel to Fort Benton in return. There will be days neither teams travels, but practices is better when you can practices with a full team.

Technique and strength are key components in wrestling. Wrestling is one of the toughest sports in his opinion. "I love basketball it's a great sport! It's a fun sport to play. It's a fun sport to watch. But At the end of the day it isn't as excruciating, you aren't getting your head bounced off the mat. Wrestling has been around since the time of the Greeks. He believes the boys going out for wrestling deserve to be fully recognized as the great athletes they are.

There are some girls starting to wrestler and are competing well with boys around the state, but he doesn't think there is anyone wrestling here that will need to wrestle one.

He'll be the Junior High coach as well starting in January. He wants to work the little kids some too, just to continue rebuilding a great wrestling program, which is his long-term goal.

They will have wrestling meets every weekend except for Christmas ending up on February 9th. He believes the Pioneers will see their time on the podium this year.