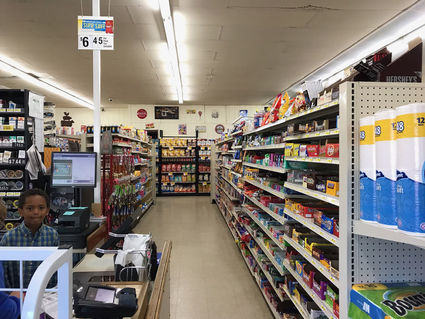 The Grocery Store has received a 'makeover'. New shelving and many more items have been added to the store inventory. Plans are to continue increasing the number of new items customers can expect to start seeing on the shelves.

Dave and Debra Louvar bought the Grocery Store in the fall of 2002. Debra was telling John Gunhold, the former owner that they were going to have to move because the elevator that Dave manage was closing its doors. John told her, "You should buy the store". Debra said, "I told Dave what he said that night and he told me to tell him we wanted it." The rest is history.

Currently the Grocery Store has had a face lift. There wasn't any room to add isles so they went higher. They have added over a hundred new items, but "we will gradually be adding more." She added, "I bought the shelving, but Associated Foods brought in the crew and they know what they are doing, so everything is properly combined in like items." She got a compliment, "It's like you are a real grocery store now!" Everyone laughed because of course it's always been a grocery store. It does look different, and the new items are fun. It's a little difficult to find things, because it's changed, but we'll get used to it.

We were sitting outside Saturday during the community garage sale day and Debra's grandson Liam Simpson asked if we were talking about selling the grocery store. I told him no and Debra told him the store would still be around until he was old enough to take over. However, Liam Simpson said, "I'm actually going to be a farmer."

The Grocery Store is an integral part of our community. They support every activity and I asked why do they continue to give to this community. "We've been there. It's what we do if you are part of a community."

Congratulations on your upgrades. They probably have what you are looking for so stop in.