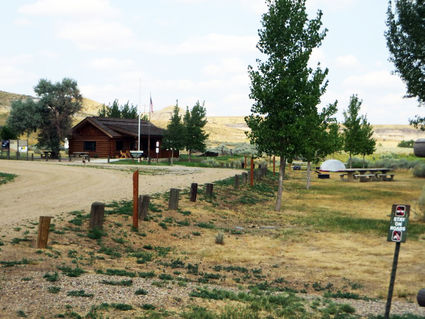 According to Sandy Broesder a volunteer at Coal Banks and a "full time RV'er", she's having "a blast!" She has minimalist life now, with small house on wheels and a dog, "a little mutt."

She spent 40 plus year in Conrad area before this first-time volunteer at any site.

"My passion is kayaking." She has kayaked the Missouri river, "Not as much as I would like to and I will do more."

Not having been at Coal Banks Landing before she doesn't have a standard to compare this years attendance to the years before. So far, this year 1,000 people have come through Coal Banks to the Missouri River and it is only July. They come from all over the nation, Arizona and many of them from the Midwest. Most of them are smaller groups. Some do use the canoe companies, but a large percentage of them float the river by themselves.

The Boy Scouts had a river float, and she loved how they respected the United States flag, making it a serious procedure in removing the flag for the night.

There was a Father/daughter river float.

"One group after they set up tents, were ready to leave the next morning and went to Big Sandy to eat supper. But we had one of those big storms. The tents were flattened, and everything was soaked. We had bedrolls, tents, clothes spread all over trying to dry them out before they left."

"There was a gentleman very early in the season, who started in the upper reaches of the Madison. He wanted to raise awareness of the pollution on the river. He was paddling a large beautiful gorgeous home-made kayak."

"We normally average 3-4 groups a day, ranging from one person to 40 in a group."

Currently the Missouri river is running at 8,000 CFS (cubic feet per second). When Sandy kayaked in May it was running 31,000 CFS. It can normally take 12 hours to go from Wood Bottom to Coal Banks and she floated it in three hours, didn't need to paddle at all.