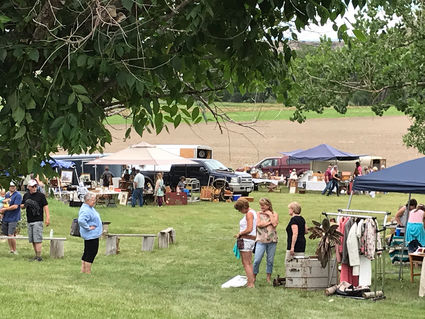 They start with a celebration of community with a potluck on Saturday night, Don provides ribs, beans, and salad. And it was more than just a time to buy from each other. Jimmy Griffin said, "it was a magically fun day!" There were over 20 vendors. One that had a 45-foot trailer with antique with a western flavor.

Don Sorensen told me that vendors kept calling, and he would have accepted them even if the called on Sunday morning. "If people show up they'll just put them somewhere."

It was an incredible day, not too hot and the storm that threatened Sunday night didn't show up. There were antiques old desks, table, horse equipment, furniture, and glassware. There was something for everyone.

Don said, "I did it for several years until 1989, and then I stopped until 2012. That was the year we celebrated the 100-year founding of the Virgelle Mercantile. The dealers came and they had so much fun and asked if they couldn't do it again"

Jimmy said there were lots of positive comments from visitors, and quite a bit of sales.