Hay Season is in full swing in the area 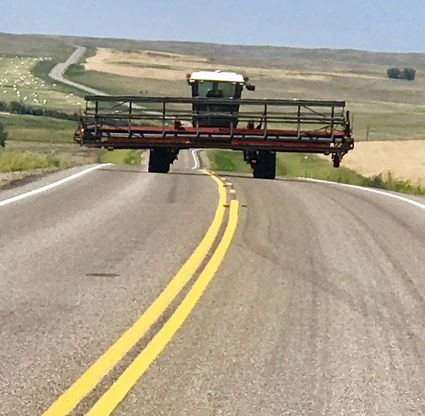 It's funny, but around here if we were to say "hay" everybody would know what it is. They would know it's made up of dried stems and leaves of a variety of plants. We know it is used to feed animals during the cruel frigid winter months. City folk may not know, and they definitely don't know what it takes to get it in.

MSU Extension writes, "Harvested forages are critical to Montana's billion-dollar livestock industry. Most livestock operations in Montana rely on rangelands - about 70% of our land area."

According to the Montana Agriculture Department, "Montana is ranked eleventh in the nation for total hay production and ninth for alfalfa hay. Alfalfa and alfalfa-grass mixtures account for about 75 percent of the state's total." MSU Extension says, "Montana's hay crop is valued at about $325 million annually. Currently, there are 2.6 million acres of hay production in Montana, and 57% of this acreage is dryland." MT Department of Ag says that Alfalfa is the highest in nutrients and energy. It must be planted every six years to maintain a good crop. It is usually irrigated unless it is grown in a high moisture area. Alfalfa hay is produced on 1.7 million acres - 790,000 acres irrigated and 910,100 acres on dryland."

Although we know how to make hay, there may be some who would find the following informational. Urban areas must understand our way of life, our culture. Maybe share it with your city relatives and friends. "First, it is cut down and made into windrows with a swather. These windrows lay on the ground to dry. If the weather is hot and dry, they can be left to cure naturally. However, if the windrows get wet or are not drying fast enough, they must be raked or fluffed, with attachments on the tractor. These rakes or fluffers flip the hay over to allow the other side to dry. When the hay reaches the correct moisture percentage, it can be baled. If the hay is baled too wet, it may ferment and build up heat, causing the bales to catch on fire. There are different types of balers. Some make small square bales weighing about 70 pounds. These were the primary type of bales for a long time and were very labor-intensive. They had to be picked off the field by hand and hand stacked. They are used mostly for horses, or if

an animal is being kept in a pen, as their small size makes them handy to haul around. For cattle, most ranchers put up huge round or square bales weighing as much as 2000 pounds. These are handled entirely by machine. The hay is carried off the fields, after baling, with trucks and tractors and stacked."

Bruce Gasvoda says they are close to finishing. The hay barley was excellent up by their house, but down by the river, where it did not get the rain, it was a little bit dry. "The rain was kind of hit and miss."

This year it was difficult to get the haying completed, because of the rain that came now and then. Every rancher I talked to said they were either through or only a day or two away. Haying is long hot difficult work, and for many hay fever is a part of the task. There is nothing like looking over a field though and seeing the bales to know the feeling of accomplishment.