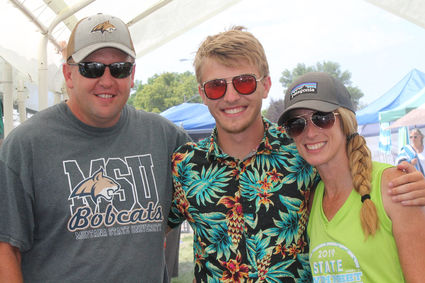 Senior Swimmers who have swum for 13-14 years have their last walk and dive into the pool at half time during the state swim meet.

Tyler Schwarzbach is the son of Shaud and Melanie Schwarzbach and has been swimming for 8 years.

He wrote in his senior profile at state that his most memorable moment was two years ago when he ate a ghost pepper before his 100 free at Columbia Falls. "I never regretted a decision more than at that moment.

He told me, "The best part is the family I got here." As he nodded his head to the Big Sandy camp, meaning the whole team of swimmers, parents, and grandparents. He accredits swimming in helping him develop and strong work ethic. Waking up at 5:30 to work out and swimming practice is intense.

He'd tell all the little kids "When every it seems like you aren't doing as good like this suck don't quit. Just give it a few more weeks you are going to improve. Just today I cut off 10 seconds."

Melanie Schwarzbach said, "It's the one thing he did early on in his life, that taught him that hard work leads to results. It gave him a sense of confidence he didn't have before. He learned that his success is entirely up to him, and if he wanted it, he could work for it, and he did."

Shaud, Tyler's father, said, "The sport has done a lot of good, especially Tyler, he has made lifelong friends other towns. They, the Big Sandy Barracudas, have done remarkably. This team is different. It's not just a team of athletes, but uniquely it's a team of family. It is totally different from any other sport."

As we finished the interview his grandmother, Linda Schwarzbach handed him a present, a photo album of his life as a swimmer from early years with enough room in it to add the final day of his swimming career.

Grace Finke is the daughter of Fred and Linda Finke and has been swimming for 14 years. She has had a hectic summer because of her music traveling in Europe and was only able to swim in two meets this year; however, she couldn't miss state because of what it has meant to her over the last years. 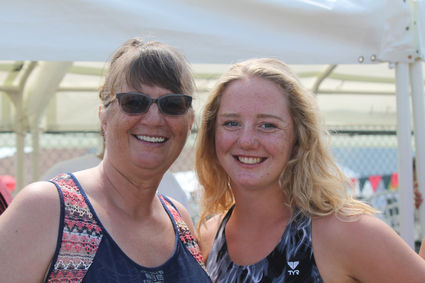 Grace Finke with her mother, Linda Finke. Tyler and Grace both finished up their swimming careers in Sidney.

Grace was on three teams, first the Fort Benton team, then the Chester, before Big Sandy formed their team. She has put in a lot of effort over the years.

She likes the people in the sport. "Succeeding in the sport takes your own effort. You have a huge competition against one payer and turn around and cheer for them because they are also your closet friends."

Linda Finke said words she would use to describe Grace for that many years of swimming are "committed, friendships, coachable, and team. It's an unbelievable experience." Linda herself said she was committed not to just her kid, but all the kids.

While we were talking, a friend said to Linda, as we were speaking Senior Walk, how fabulous it was that Grace had committed to swimming for so many years, she believed it was such an honor for the senior swimmers to have this moment.