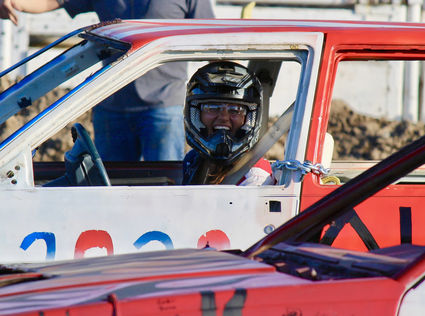 Andrea Rutledge, the only Big Sandy resident to enter the Chouteau County Demo Derby, she won for best paint job.

Eating cotton candy is a requirement at a county fair. So is eating fried bread, Indian tacos, and drinking lemonade. I was sitting in the 4-H Chuck Wagon eating the fair special pulled pork, baked beans, and coleslaw in a plastic cup. A little boy waiter came up to me and asked if I wanted him to remove my cup. I said, "No, I'm not through eating yet. I just talk too much." He smiled as to comfort me and said, "My mom does that too."

There is only one event that helps Chouteau county residents stay connected all at the same time, and that is the Chouteau County Fair. It takes a village to pull off such a huge event. Board members are Kelly Rutledge, Fair Chairman, Colby Baumgarn, from Big Sandy; Blaine Judeman, Geraldine; JC Lindeman, Dyke Kalanick, Fort Benton; and Board Office Manager Shirley Embleton. Plus, you have a chairman for each department and an organizer for every event.

When you first arrive at the fair, the Lion's club is at the gate asking for a donation to be able to park in the grounds. The money donated goes to numerous scholarships for high school seniors across Chouteau County and a variety of youth activities.

Big Sandy had zero vegetables/grasses entrances in the fair. We didn't have a single flower entered in the fair either. It was disheartening to discover our once highly competitive community, usually taking seconded or first now as zero participation. It is true the Hopp-Illiad Homemakers club were strong supporters of the booth, and Jeannie Rutledge used to call everyone in town and encouraged them to bring their vegetables over to her house, and she would take them to the fair. It's just a sad comment of our day that our community doesn't bother to be involved anymore.

Our children are still involved because they love art and making stuff. The grade school teachers have been good at bringing their artwork to the education booth at the fair. A quick look at the art in the art department shows there is still some interest.

Our most prominent involvement was in the yearly pig wrestling event. It was a cool night, and this year they allowed the peewees two minutes to wrestle the pig, and a number of the groups did finally put their back legs into the barrel. It is always fun to see the kids celebrate with hugs and high fives after lifting a pig into the barrel. Thank to Golden Harvest Seeds for the pigs for Pig Wrestling.

The truck and tractor pull had a huge crowd, as usual, with many locals participating in the gas stock and diesel stock events. Mason Ophus, who is following a family tradition of pulling, registered after making up his mind to do so that very afternoon. "For the fun of it." He told me it depended on the condition of the track, on how well he would do. Too dry and too wet are equally as bad. He pulled with his "daily driver." I asked him what would happen if he damaged his pickup. He said he'd be a "daily walker." There were ten stock gas pickups and 11 stock diesel pickups. Mason has been pulling off and on for 11 years. "Grampa Lyle has trophy's in his house from when he started pulling in the 70's. "He bought a brand-new orange pickup that Clete still runs." Mason told me, "It gives me a connection with him." It's a family tradition, and it's got to be a Chevy.

All the 4-H and FFA grand prize winners were not available at print time. The 4-H and FFA livestock sale started at 2:00 on Sunday afternoon, with participants, putting on brave faces and even smiles as they walked that animals back and forth. I sat in the shade with a small breeze. Two sisters who won the Grand Champion pig and the Reserve Champion pig brought their pigs out first. They had dressed their pigs up by putting a little glitter in their pig's hair. Altogether there were 36 pigs sold, six sheep, 22 fatten beef and six replacement heifers.

The last event was the Demolition Derby which by the noise of the crowd was one of the favorites, and maybe I think they would secretly like to smash a car. That's why Andrea Rutledge decided to run a car for the first time in the Chain and Go. She said she wanted to be in the derby because she could "go a little crazy and hit some cars around." She wanted to be in the derby at the age of 16 and now had the opportunity. Both her dad and her uncle have been in the Demolition Derby before. She had painted her car to represent the theme of the fair, "Make the Fair Great." Andrea said, "We are so blessed to live in the country we do. So, painting the car red, white and blue and being a little patriotic seemed a perfect time." She won the Best Paint Job as determined by those in the stands. She did pretty well in her heat too, considering she lost her back drivers side tire with the first hit she received.

Between Demolition Derby heats there was an Indian Taco eating contest won by Erik Siestsema.

Involvement is the key to connectivity. It is time to visit with friends. Dave Bahnmiller told me the fair is the one time of year he gets to get caught up with everyone from Big Sandy. Maybe next year Big Sandy could do a little better in involvement in the fair. Anyone at all interested in doing that?