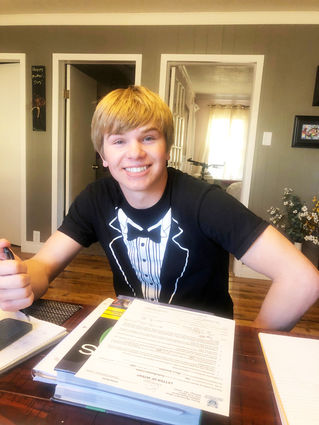 Ryan and I exchanged E-Mails to visit about his chance to play college basketball.

Mountaineer: You were first going to go to Butte, correct? Why did you decide to go to Rocky?

Ryan Roth: "Yes, I had made plans to attend Montana Tech and major in geological engineering, but one day while working, the head coach from Rocky called me. Thankfully, I had the service to return his call because he told me that the program was interested in picking me up. I decided to go to Rocky because it was the one chance that I had to play college basketball and I couldn't pass it up. Basketball wasn't the only thing that caught my attention though, because I know how great of a school Rocky is when it comes to academics."

Mountaineer: What do you think of the coach at Rocky?

Ryan Roth: "After meeting Coach Dreikosen earlier this summer and speaking with him over the phone, I can say that I like him a lot. He has great energy and attitude, and I am looking forward to having him as a coach and leader."

The following is a Press release from Rocky:

As a senior, Roth, a 6-foot-1 guard, averaged 20 points, four rebounds, three assists and two steals per game for the Pioneers, and was named to the Class C all-state team.

Roth plans to earn a geology degree and carries a 3.86 GPA.

Dreikosen said of Roth: "Ryan is a proven winner that we are looking forward to having join our basketball program. He can score and has the ability to get to the free throw line. Ryan is a tremendous kid and a great student that we believe will make our program better."

Mountaineer: College BB is something you have worked for a long time-Congratulations. Do you think you are prepared for the college level?

Ryan Roth: "Coach Dilworth always said, 'The only reason you should be nervous is if you're unprepared.' I am not nervous; I am excited."

Mountaineer: What are you doing currently to get yourself prepared?

Ryan Roth: "To keep up with my health and skills, I have been shooting on outdoor courts, and I have been running a little bit too. Besides that, I am waiting very patiently for the gym to open back up again."

Mountaineer: What will you be graduating in? And can you complete your degree at Rocky?

Ryan Roth: "I plan on pursuing a degree in geology, and yes, so far, I plan on graduating from Rocky.

Mountaineer: Anything you might want to say to a young Pioneer BB players about how to work towards your dreams?

Ryan Roth: "I would suggest always working hard and maintaining a competitive spirit in sports and school. I would like to thank all of my coaches and teammates over the years for helping me reach this milestone in life. Also, I wouldn't be where I am today without the support from the community."