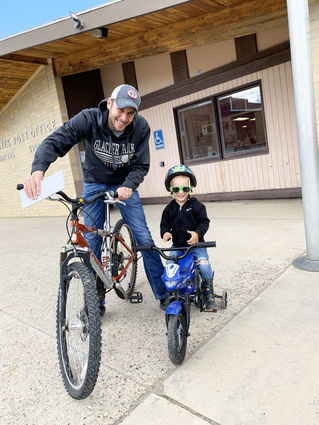 After researching Father's Day, I discovered it isn't celebrated the same way, or for that matter, it isn't even celebrated on the same day around the world. In the United States, it is always the third Sunday in June. In 1909, a woman named Sonora Smart Dodd, "tried to establish an official equivalent to Mother's Day for male parents." She went around to local businesses to gather support for her idea, and on June 19, 1910, the state of Washington celebrated the first-ever Father's Day.

In Brazil, it is celebrated on 2nd week in August in honor of Mary's father, St. Joachim. The Catholics know him has the patron saint of fathers. And like in the United States, children give homemade cards and gifts to their fathers.

In Russia, the holiday is called "defender of the Fatherland Day." They now acknowledge every father, although it was initially a military holiday, and they still celebrate with parades with the Russian army. Wreaths are always placed at the tomb of the unknown soldier during the celebration

It is also the 3rd week in June, in France it was created mainly to sell cigarette lighters. Traditionally they give red roses to the fathers. White roses are delivered, remembering fathers who have passed away.

In Thailand, Father's Day is celebrated on December 5 to celebrate King Bhumibol Adulyadej's birthday. People wear yellow to respect the late king. They also give fathers and grandfathers canna flowers.

Mexico celebrates Father's Day with a 21 Kilometer race. Dads are encouraged to run and bond with their children.

In Germany, it is celebrated 40 days after Easter. This is also known as Ascension Day. In Germany, men celebrate by organizing hikes and other gatherings.

Each family celebrates their father's differently. But we do need to celebrate. Have a great day!