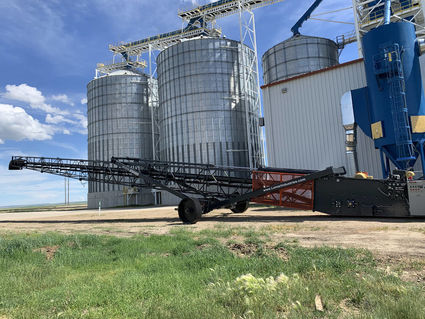 After Big Sandy lost a grain elevator in town when CHS closed its door, I stopped one day at EGT-Tunis to visit with Josh Wulf, the Elevator Manager. He immediately wanted to place ads in the Mountaineer and to support Big Sandy however he could.

EGT build three identical elevators in Montana, one at Tunis, one at Chester, and one at Kintyre Flats/Frazer. A year ago, they also bought an Elevator in Sidney. The Export Grain Terminal, EGT, is a joint venture between Bunge North America, the North American operating arm of Bunge Limited, and ITOCHU International Inc., a U.S. subsidiary of Japanese trading company ITOCHU Corp. and Korean shipper STX Pan Ocean Inc. EGT headquarters are located in St Louis, Missouri, while the export terminal is located on the Columbia River in Longview, Washington.

The grain is shipped mostly to Japan, South Korea, China, Taiwan, the Philippines, Indonesia, and Vietnam in Asia. According to Jeff, "Montana has the world's best wheat, and they can't grow it." According to their web site, the grain is occasionally sent to Guatemala, Chile, El Salvador, Peru, and Colombia in Latin America.

Last week I stopped in again because there was some major work being done at the site. Josh gave me a tour of the facility, and although I am a farmer and know about elevators, it was fun to see how this fully automatic elevator worked. He made me put on the required protective gear, a hard hat, and a fluorescent orange vest. It made me feel like a real reporter.

I know the farmers in our community know how to deliver grain to EGT, put for those Big Sandy folks who don't let me give you a quick explanation. The farmer is given a plastic card, which looks exactly like a credit card. When he drives the truck up to the scales, he places the card into a terminal, so the computer knows who is delivering the grain. A long arm goes out to the top of the truck and goes four feet down into the grain to pull out a wheat sample. That sample is tested immediately by a computer, and the information is sent to the elevator, so when the truck pulls up to unload his wheat, he knows precisely what the test results are. They store that sample, so if the farmer wants it tested by an independent lab, they can send it to them for verification. The truck is unloaded within a couple of minutes. The farmer knows immediately how much he hauled and what he is getting paid. After the truck drives off, the entire elevator floor is swept clean.

We walked over to the new site where they are going to stockpile, on the ground, mostly winter wheat, and he pointed out the old auger, like the one we have at home, that they had used last year and then to the new grain piler. The grain pileer can dump 25 trucks in an hour. That is a truck every 2.5 minutes. According to Jeff, "The goal is simply to keep the combine running for the farmer. So, zero shutdowns are waiting for trucks to return." The grain pile will cover 10 acres about the size of three football fields. The tarp covers five acres. I said, "Wow" He laughed and said, "You can come and help us if you want. The 24-inch air vents run for 1/3 mile.

"It is a sizeable commitment-a huge investment for us. We are pretty committed to piling grain. Our philosophy is to make sure we have room, especially at harvest time, an uninterrupted harvest delivery. We want to help make a farmer-friendly commitment so that they don't have to stop."

They mostly pile Hard Red Winter wheat, but there may be a pile of some Hard-Red Spring. Yes, they do have some loss due to piling. "We do lose a little bit of grain along the edges, but we pick up most of it with everything we do. The dirt is so compacted. We get almost all the kernels of wheat."

EGT has six employees because it is so automated and so fast. Three office staff and three elevator staff.