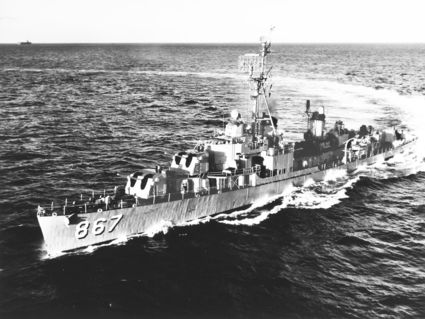 One of my favorite school activities is the Veterans Programs that were held these last few years. The afternoon started with a free meal for the Veterans at Senior Citizens. Afterward, you would go over to the FE Miley school for a Veteran's Program put on by the elementary students. I loved it because everyone would be wearing red, white and blue and the children would sing all kinds of patriotic songs. A small talk is given at the high school before every vet stood to their arm forces anthem being played by the high school band. It always brought me to tears. This year, there is no Veterans Program as COVID has prevented it from happening, but please pick up the phone and acknowledge them if you know a veteran. We owe them so much!

One month after high school was over, Chuck was in the Navy, and four years later, he came home. He picked the Navy because the draft was going at the time. He was from a Class B school outside of Detroit.

The USS Spridling was a destroyer, which is one of the smaller ships in the Navy. Chuck said, "it was affectionately called a tin can because they rolled like a beer can in the wind, and they were only about ¾ of an inch thick."

Being a vet is very important to him. In the four years, while

To all Veterans, you are so important, and we thank you for serving!