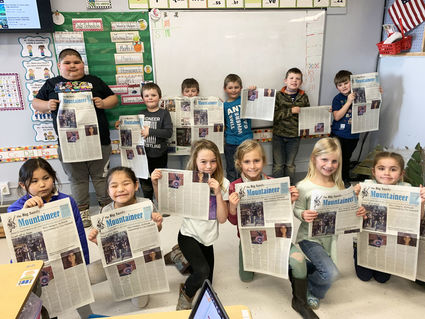 My granddaughter, Dorothea, inspired this article. She and I were driving home when she said, "You own the Mountaineer. It is a very important job." And without skipping a beat, she told me after she was through with grade school and high school that she wanted to own the Mountaineer. "I know how to be a boss! I know how to make decisions." I asked her if she was the boss right now what would be put in the paper. After thinking a bit, she said, "More pictures of kids!"

The question of what to put in the paper and what to leave out is always discussed each week at the Mountaineer. Decisions aren't made lightly. So I thought, let's ask the question. What should be in the paper?

I decided to ask the 1st and 3rd graders what they wanted in the paper. After all, if we can get kids reading the paper, maybe adults will. I took them the Mountaineer with the front-page picture of grade school children wishing the wrestlers good luck at state. It also had Captain America on the front page. It was fun because they were genuinely excited to get their own paper.

When I asked them what they thought I should write articles on, the first suggestion was "Cat Women and Bat-Man." One of the children wanted me to write a history story about Davy Crochet. "How about kids helping on the farm." "Police officers are cool." "I think you should write an article about how animals get born, like baby goats." "How do baby deer grow up and cows." "Unicorns." One of them mentioned wrestling, and I promised them I already had a picture of all of the wrestlers, and I was going to put it in the paper.

The Third-grade students first mentioned Mermaids. Another student mentioned his dad was an army vet. One shy student raised her hand and said I should write a story about all the stray animals and hope they could all find homes. Another said I should write an article about donations going to the nursing home. One boy wanted me to write about new inventions. One boy told me he was walking to the grocery store when he saw a homeless man sleeping in the alley. "We should write an article about how to help the homeless." They wanted an article about special stones, and they even knew that Glen should be interviewed. One young gentleman said I should have cartoons in the paper, and I told him I would love that. Ask him to make a cartoon, and I would publish it. One said, "my dad. His name is Zane, and he is a doctor. He's really famous around town." And another student said, "Ya, he helped me before."

One girl raised her hand and said, "How about us trying to make up stories? Would you put them in the paper?"

You should be watching the Mountaineer as I take their suggestions seriously.