The Pioneers' first contest in the tournament was against the 8C champion, the Roy-Winfred Outlaws; it was an early morning game, something the Pioneers are not familiar with this season. The Outlaws would be the team that would start their tournament out on the right foot, jumping out on the Pioneers early and setting the tone early, resulting in putting the Pioneers in an early 22-7 hole. The Pioneers wouldn't let that define them as they started getting to the basket and getting good looks. They slowly would chip away at the Outlaw lead a few threes, and some solid defense would get the Pioneers going in the right direction and with a last-second three-point basket from Kody Strutz to cut the halftime lead to six with a score of 31-25. In the third quarter, the Pioneers would continue to chip at the lead and slowly work their way back into the game and see them only trailing by two and the end of three quarters. The offense attack would go away in the fourth quarter as the Pioneers would start to settle on the offensive end. The Outlaws would take full advantage, winning the rebound battle and eventually pulling away from the Pioneers. The Pioneers would end up dropping their first contest in the Tournament. Final Score Roy-Winifred 63 Big Sandy 53. Braydon Cline led the Pioneers with 24 points, Sophomore Lane Demontiney would have 12, and Kody Strutz would add in 7. 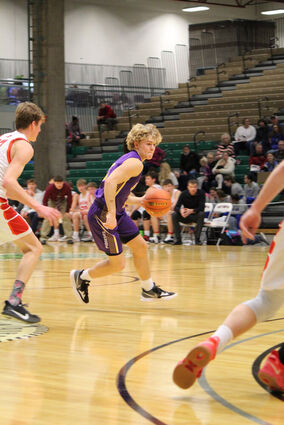 Friday morning, the loser-out contest would face the 10C champion Heart-Butte Warriors, who had previously lost to 9C opponent the Chinook Sugarbeeters. The Pioneers would not come out very fast to start the game again, and the Warriors were shooting the lights out, knocking down four threes in just the first quarter as they would jump out quickly to an 18-8 lead. The Pioneers would start to have to put the pressure on as Coach Thomas Dilworth would throw the Pioneers in a full-court trap, forcing some turnovers and allowing the Pioneers to crawl back in. Junior Braydon Cline knocked in three consecutive three-pointers, and the lead would be nine after being down 18 midways through the second. In the second half, the Heart Butte Warriors continued their hot shooting night, going 60 percent from the field in the contest. The Pioneers did not have enough to counter the hot shooting of the Warriors. They would see their season come to an end in a season that shows a lot of promise for the future as the Pioneers are returning every player next season and hope to make a deeper run next season. Heart Butte: 83 Big Sandy 59. Braydon Cline led the Pioneers with 26 points, including six three-pointers, and Wylee Snapp would help the attack with nine and Kody Strutz with 8. The Pioneers had a great season and are excited to see what next season has in store for them. The Pioneers would fini