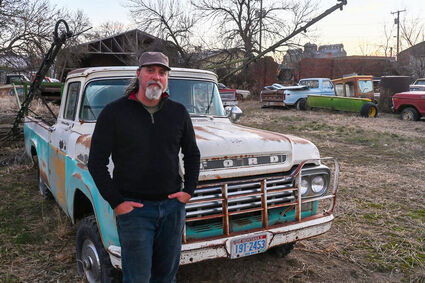 Brett Holmquist graduated in 1992 after four years of being a star basketball, track player, and football player for the Pioneers. Everyone also knew how good he was at music. He went to Concordia College in Moorehead on a choir scholarship. He stayed there two years but transferred to U of M to finish his teaching degree.

Brett is still making music. "I've been coming back to Big Sandy to visit with Gramma Helen, Nathan, Chris, and Josh." A year ago, Stick and String were recorded at RD Recording.

An Evening of Music with Stick and String and the Lucky Valentines will play at the Public House in Fort Benton on April 29th, 5-8, and at Pep's in Big Sandy on April 30th, 7-10. Brett would love to see all his old friends at Peps. He would love to play and sing for you.

He is married to Anna Faith Sennessy with bonus kids, two stepchildren, Boone and Azmay. Brett's son, Tallon, is very athletic. This year he is the all-class leader in Montana in the shot put. He also loves music. Brett's Daughter, Sol, is very musically and loves to sing, dance, and perform.

His parent, Stan and Jan, live in Columbia Falls.

Brett said, "It's probably since I played basketball that I made the Mountaineer."

Brett is one of the founders of Ravenwood, which is its 19th year.

"Ravenwood founders Laura Strong and Brett Holmquist have deep roots in outdoor mentoring. Both grew up with expansive back yards in the big, wide country of Montana. As young professionals in Yellowstone doing biological research and conducting education programs for youth, the couple witnessed a fundamental lack of nature connection among many of the young people they encountered. For many kids, these programs had been their first serious outdoor adventures, even among those who grew up in Montana! Laura and Brett also witnessed a real thirst for learning and a noticeable shift in awareness and appreciation among their students when they were making connections on the land. They saw the trend of what is now called "nature deficit disorder" emerging, with kids spending less and less time exploring and learning outdoors and more and more time plugged into electronic media. They decided to meld their various talents in the science and education fields to do something about it-and the inspiration to create Ravenwood was born."